"Liberty, when it begins to take root, is a plant of rapid growth." George Washington said this. It's also a biblical metaphor for the reign of God—true and a bit scary. How do we accommodate such growth?

Washington's portrait must, legally, always be on the U.S. $1 bill. But the $10 is now up for grabs with a plan to replace Alexander Hamilton's portrait, presently on the obverse side of our ten-spot, with a woman!!


How far has Lady Liberty come? How wide is her spread and how broad her embrace? Who shall this woman be?

In 1884, the cornerstone of the New York harbor's Statue of Liberty’s pedestal was laid. The French gave the statue, and the U.S. raised the money for its pedestal. We funded the foundations mostly by an auction of contributed art and literary works. Emma Lazarus, 34 years old at the time, donated a poem for the occasion, which she titled "The New Colossus."

Lazarus, a Jewish-American author, was born in 1849, the fourth child in a wealthy family of seven children. She grew up in New York city’s Union Square area and mingled with the literary elite. As a woman and a Jew Lazarus knew the sting of prejudice on both counts. She burned with passion for liberation and was devoted to the plight of Jewish immigrants. She had the experience of assimilation into this land of liberty, and longed for more. At the same time, she urged the Jewish people to organize for a homeland in response to rising antisemitism—well before the term Zionism came into use. Lazarus died young at 38, probably from cancer.

In 1903, 16 years after Lazarus’ death, her friends lobbied to have a bronze memorial tablet with Lazarus’ poem inscribed on it installed inside the entrance to Ms. Liberty’s pedestal. The poem reflected her soul’s words and immortalized a vision: there is hope for the “huddled masses.”

Not like the brazen giant of Greek fame,
With conquering limbs astride from land to land;
Here at our sea-washed, sunset gates shall stand
A mighty woman with a torch, whose flame
Is the imprisoned lightning, and her name
Mother of Exiles. From her beacon-hand
Glows world-wide welcome; her mild eyes command
The air-bridged harbor that twin cities frame.
"Keep ancient lands, your storied pomp!" cries she
With silent lips. "Give me your tired, your poor,
Your huddled masses yearning to breathe free,
The wretched refuse of your teeming shore.
Send these, the homeless, tempest-tost to me,
I lift my lamp beside the golden door!"

These fiery words recall to my mind the gospel vision of Jesus the Christ: "Come unto me all who travail and are heavy laden and I will refresh you." In one prayer book liturgical version, this phrase is the invitation to the table of Holy Communion. I said it every Sunday over my early years of being a parish priest and thought these the most authentic theological words I'd ever heard. There is true divinity in all such words, calling us still to compassion and justice. How, when, and to whom do you say them?

“The New Colossus” was the projection of a young woman’s own experience and hope onto a statue, a still-standing symbol of America’s beginning and her commitment to liberty and justice for all. Darn good spirituality! The poem did not just define the monument, but also envisioned the country's immigration policy. Who can forget the call of the Lady of the Harbor? I grew up waving to her, and was awestruck looking out from the top of her "crown" at what I thought must be the whole world.

Hers is also the call of all religions and their holy scriptures—not to mention the divine gift and vision for Creation. Liberty and justice for all make peace for all. 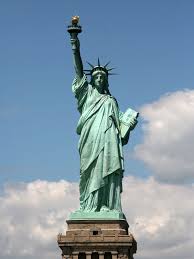 Over centuries, many have followed the vision, yet without legal protocols in place. They longed to breathe free. Now we have a problem with our "promised land." It seems to be a tragic irony that now we are forced to create enslavement in order to to protect liberty. It's costly to imprison illegal immigrants, most of them women fleeing violence, so we track them down and shackle them with GPS detection devices, the kind people under house arrest must wear, until we can put them through the proper paces of legalization, a protocol we might have had in place with forethought. It is no surprise to me that a woman wrote the mighty vision, that a woman is encased in colossal statuary, and that it is mostly women who still have no safe harbor.

What will the "land of the free and the home of the brave" do now?

Are Lazarus's words still enough to inspire and inform our current immigration policy?  Does this vision have clout and spirit enough to console those who live in fear of deportation, to motivate our citizenry and government? Is it enough to inspire religions to speak out? Is it enough to fill places of worship with the tired, poor and huddled masses yearning to breathe free?  Might "expired" church buildings become affordable housing and enliven the vision?

I don’t know. But I nominate Emma Lazarus as a worthy candidate to be the first woman to grace an American greenback, the $10 bill.

I have no long-term answers, but I know Lazarus's vision is more expansive than it appears, and that liberty includes all humanity on all shores, as well as our endangered planet. The hope of this is worthy of prayer and hard political work.

For liberty we risk extinction unless we broaden our embrace and open wider our hearts.