I don’t know you personally but I feel as if I do what with all the political exposure you have and with all my passion and prayers for your election as our first woman president—a very obvious choice for every reason I can think of. How in the world can this race be close?

What I really want to say is not political but personal. I am sure it stings your heart to hear and see and read so much nasty commentary about you—your every move, your clothes, your body, your teeth, your ambition. Good God!  And then having to work so hard to hide your true feelings from public exposure, lest they they call you “weak” after spending much time calling you “hard” or “cold” for not revealing your feelings. The media screams for your “true self”— whatever the hell that is. What do people expect? Don’t answer that in case it might incriminate you.

I have tasted some of this kind of emotional pain at a time in my life when I was fighting with the patriarchal church to be ordained priest back in the early 1980s, just after the Church had voted we could be priests. I was dumb, or innocent enough, to think that the vote to include women had cleared the path forward. It did, but the path turned out to be a torturous cow path with lots of stinking flops along the rutted way. Despite progress, many minds, doors and paths remain closed.

I guess I was lucky I didn’t know how bad it was when I applied. One of my interviewers told me she was against the ordination of women but that would not interfere with her ability to screen women objectively. I admired her pathology. Another interviewer, a gay male priest, declared that I had “two-point-two-four-too-many” children. Which of my four children to assassinate? The committee and the bishop rejected my application, saying I couldn't be a mother and a priest—"dual vocation" they called it. I tried again—and again.

That’s what I see you doing, Hillary. You may get slapped down, you may make big mistakes, you are unpopular, but you keep believing in yourself. You have never given up. What stamina!!

I never gave up either. But I had some things to consider—one of which was that the church was as political as any other institution. Oh, yes, it is holy too, but then not much is purely  blessed or cursed. I hadn’t kept up with feminists or talked to other women. I hadn’t even made it my business to know that the bishop of my diocese had voted against the ordination of women. All I’d done was pray, read Betty Friedan, launch a wild midlife crisis, confess my own sins and flaws and mistakes, and try to drink away my shame at being rejected. I thought the church would be, well, nicer.

It wasn’t until I got political that I understood the double standard for men and women in the church.  Besides raw sexism there was also the silent collegial pact of white male authority—dangerous to breach.

I could have used you as a consultant. I learned as I know you have. We are still learning, becoming. 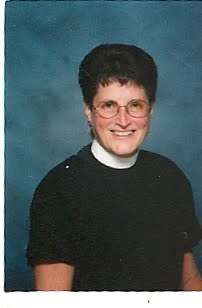 Time by itself doesn’t heal a darn thing, but it does guarantee that people like bishops get older and retire. I waited and watched my Crockpot; it taught me to simmer. Time and love provided space to grieve, get support from good family and friends, and deepen my trust in myself and in God whose presence strengthened me from within. I can not tell you how I knew that exactly but I did. I bet you know the same.

Hillary, you have devoted your entire adult life to politics. You have given your considerable gifts to make democracy safe and fair and American. You have stumbled and fallen. You have been betrayed and belittled, and you haven’t quit trying. You are also a woman of sturdy faith.

I am so sorry about all the abuse you have suffered. I admire your courage. I am praying daily that God will continue to give you integrity of soul, strength of body, and wisdom of mind. (I am praying the same for Mr. Trump, because he will need these things after he loses this election.)

Besides prayers, you have my gratitude for being a heroic front runner—also my vote.