May I speak to you in the name of the God who inspired St. Ignatius of Loyola to say: “We are created to live in God’s love and life for all eternity.”

I am honored to be here today speaking your praises. I can hear your voice now in my ear: “Pffft non, non, non. It is the Lord, not me.” For all your adorable arrogance, Pierre, you were truly humble.

Still, I will speak.

I knew you'd choose scriptures that affirmed Ignatius’s wisdom:
-From Isaiah, a message deeply personal and universal:  Do not fear for I have redeemed you. I have called you by name. You are precious in my sight and honored and I love you.
-Psalm 23, of course. I picture you now beside tranquil waters in lush meadows—these could be French meadows, possibly resembling Marseilles, or Wallingford, Connecticut, where you lived with your beloved Mary.
-From  I John: Beloved let us love one another, because love is from God; everyone who loves is born of God and knows God. Whoever does not love does not know God for God is love. God’s love was revealed among us in this way: God sent his only son into the world, so that we might live through him. In this is love, not that we loved God but that God loved us . . .” (I John 4: 4-10a)
- Gospel of Matthew: Jesus recited Beatitudes, blessing the beauty and messiness of life all together—in terse inclusive phrases, a little blunt, like you, Monsieur.  Your beatitude? Blessed are those who hunger and thirst for righteousness, for they will be filled.  Thank you for your courage, Pierre. You took risks where others feared to tread.

For you it was always about Love and Jesus the Christ, the one you called “that guy.”  If on a directed retreat I didn’t see Jesus on the horizon as I prayed on the beach at Mercy Center, something was missing. You would question, not scold, but with intensity ask: “Leen, do you see the Lord, the guy? I squinted as I looked out to sea from the beach. No Jesus-guy. 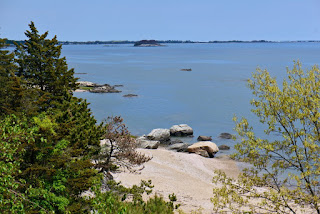 In time I learned to see the Lord through my beeg eemaginashun, as you would say. I sat on this bench. 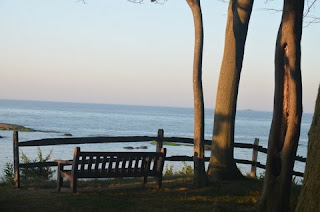 And too, Pierre, you would say when I came to visit in your latter days: “Hey, where is the guy?” You meant my guy, Dick Simeone, my beloved priest spouse. He is right here today, offering your praises and remembering with me. 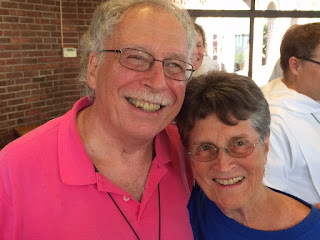 Through your ministry, Pierre, especially the Spiritual Exercises of your genius-saint-guy, Ignatius, I discovered that you would never not be a Jesuit. You can take the guy out of the Order but you can’t take the Order out of the guy. Getting to know this Jesus-guy in my own flesh was the best spiritual gift I ever received. Merci Monsieur, merci beaucoup.

I remember when we first met met in the early 1980s. I’d heard a Roman Catholic chaplain colleague rave and rave about knowing Jesus so well. I thought she was pretty nuts. I also felt insulted, as if I didn’t know Jesus very well, which I didn’t. But I was also entranced and intrigued. I asked her how she knew Jesus so well.
“You have to have a Jesuit for that!” she announced.
“Where do I get a Jesuit?” I asked.
She intimated, but stopped short of telling me, that I should become Roman Catholic. I did, however, have to sign up for a silent directed retreat at Mercy Center with Pierre Wolff, her Jesuit of choice.

I sat in a retreat room among several other quivering eager newbies, half expecting to see Jesus sweep in. But it was you, Pierre, announcing that we all would introduce ourselves—briefly. Very short, you said, and gave your own introduction: “Pierre Wolff. France.” Spit spat. I would soon learn that you had a big heart— and a snappy mouth.

There followed a bunch of paragraphs-long, mini-bios, none of them necessary, except to quell our nerves. Then came the seestairs, your three female minions who would assist you in directing us on this retreat: Judy Fortune, Mary Daly, Elaine Deasy, Sisters of Mercy. Blessed are the merciful for they will receive mercy.

Oh God, I thought, nuns! Maybe this is too Catholic for me. But I had harbored secret longings since junior high school, mostly because they had a woman up front in their churches. A woman, no less—a stone statue, but still . . .   I prayed I’d get one of these Mercies for my director. This Pierre-guy would not be warm and fuzzy!

But I got my Jesuit. So began our fifteen-year relationship of spiritual director and directee. It was never a flirtation, although I had become quite expert in this strategy in my midlife. Pierre, you accompanied me, respected me, let me argue with you, even reprimand you, nursed me through the heartache of being rejected initially in the Episcopal ordination process, the grief of divorce, and the joy of remarriage, convincing me—over and over— that I was a good enough mother, and that God saw me as precious and honored and beloved, no matter what. When I’d get overwhelmed and freak out you’d say: doucement cherie, doucement. Take it easy.

You’d say: “Leen, you are my priest.” But no, Pierre, you were my priest. You taught me how not to fear. You taught me to be free—free! It is for freedom that Christ has set us free. (Galatians 5:1) The charism of the Jesuits is one of open-heartedness and open-mindedness—like you.

And you taught me how to hate. When I read and re-read your amazing small book, May I Hate God, I knew it wasn’t God I hated, but the Church—at least for a time. You weren’t so happy with your own Church, Pierre, all because of the dismissive ways women were treated.

You celebrated Eucharist  among us informally—people of all  traditions welcome. You knelt at a low table on which the bread and wine rested, awaiting words of consecration, yet already consecrated by our presence in God. This is still my favorite way to celebrate the sacrament. Free.

Still, imagine my shock when one day at work I received a call from you in your frenchified English talking about Mary and marry and getting married, and Mary again. Somehow I knew this was not the stone statue of Mary, but a woman of flesh and blood that you loved deeply. You wanted ME to officiate at your marriage to this Mary. I said yes with more aplomb than I felt, and before I knew what I was doing. I was hardly wet behind the ears, and this would be my first ever marriage liturgy: September 10, 1988, just six months after my ordination as a priest.

The requisite pre-marital counseling felt quite hilarious. Me, a baby priest, counseling you, Pierre, a larger-than-life authority figure to me. It was comical.

But you and your Mary were gracious and dear. I listened to you two talk about your relationship, your love, your desire to marry in the sight of your Lord. I said something lame. But then I just looked and listened to you both, and I knew: here was love that participated in Love Eternal; here was Easter Love that would nourish you two and everyone your lives touched; here was love that could sustain great grief as you, Pierre, left your country, your order, your faith of origin, your Roman Catholic priesthood in a short span of time. Blessed are you who mourn for you will be comforted. 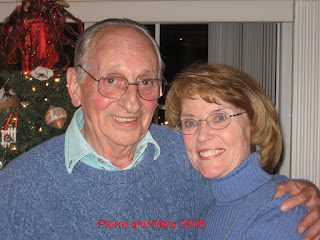 All this for the love of a woman named Mary. That has a scriptural ring, no? And Mary: Blessed are you who mourn for you will be comforted.

Merci, my French, Jesuit, priest, Jesus-freak, Episcopalian. Blessed are you, for you have lived and loved in God who is Love and who loved you first.