One of my favorite books of the Bible is Ecclesiastes. That’s odd because it is many people’s least loved book. It’s in the Christian Old Testament and, according to apocryphal story, became the subject of great controversy and was nearly dropped from the Canon of Scripture.

When I was in seminary back in the 1980s, a humorous audiotape circulated among us about Ecclesiastes’s author, Qoheleth, the wise preacher. Many male voices argued vociferously, over-shouting one another, about its qualifications. Was it genuine? Was it holy enough to qualify for holiness? Did a book so cynical, even fatalistic in its approach, belong in a collection of authoritative sacred works? The din of their fervor made us all laugh, and also proved, to me at least, that this earthen wisdom was indeed sacred.

Wisdom and righteousness are elusively mysterious, yet both are essential for the embodied soul. There is a time to struggle against the way things are and a time to let go. Everything belongs. This message was so depressing that scriptural scribal editors added a very small Epilogue, almost apologizing for this nutty sage, assuring us that in the end God will make it all okay. Such dilution! Such lopsided heresy.

Here are Qoheleth’s well known biblical lines: dated between 450-350BCE—perhaps. There is no scholarly consensus about dating, possibly a sign of this book’s ultimate worth. 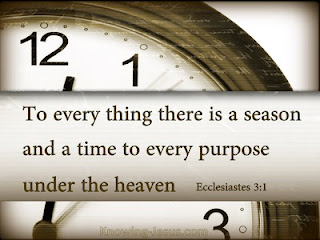 You will also recognize Qoheleth’s ancient voice in the popular song written by Pete Seeger in the 1950s: “Turn, Turn Turn.”  Seeger wrote it as a plea for peace, adding a line at the end, “. . . a time for peace, I swear it’s not too late.”

Members of an  an EfM seminar group recently listened to a reading from Ecclesiastes and pondered their own responses. As I listened I thought the struggle to have things be one way or the other way, in a kind of binary mentality, was very true to lived experience and a particularly tempting attitude just now. Many scary, even violent things are happening—massacres, bombs sent to political figures, abnormal weather events, and more. There is a time to hate, and a time to love; a time to fear and a time to trust.

NOTE: Qoheleth does not say either/or; he says both/and. One woman wondered aloud: "How long does a “time” last? " Will this era pass soon?  What about the confusion of trying to land on righteousness—from whose point of view?

Then I remembered one of Jesus’s parables, a favorite of mine: the parable of the wheat and the weeds growing together in a field. (Matt. 13:24-30) The slaves (slaves no less!) come nattering and nagging about how these weeds got into a pure wheat field. Should they rush in and rip out all the nasty weeds? An enemy is blamed; assumptions are made that the kingdom of heaven must be pure; and self-righteousness takes hold. Final answer to slaves?  No, let them grow together until the final harvest. A warning is issued that in pulling out weeds any human action might pull out wheat as well. Let go and let God. 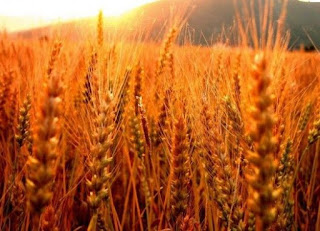 There is a time for wheat and a time for weeds. Obviously, the parable tells us that we are NOT qualified to identify and separate good from evil individuals. This is not ours to do, not ours to judge, not ours to execute. This parable is only in Matthew, and Matthew has a heavy moral agenda, appropriate for his time, but perhaps not forever and ever amen.

This is a time in our nation when we are living with wheat and weeds and fighting about who is which, making assumptions about the true nature of each.

It is a time to let things grow together, because they will anyway. After all, both wheat and weed do grow and flourish in the same fertile field. God have mercy, this is hard wisdom!