The icon is painted by Robert Lentz. The inscription in Syriac reads: "Equal to the Apostles."

July 22 is the Feast of Mary Magdalene on church calendars. It rarely gets honored in parishes, except maybe in big Roman, Eastern, or Anglo Catholic ones where every feast and its subtitle makes the rota. Or in church communities named after the saint. Or where there is an uppity woman priest like me, nagging for its recognition, and incidentally, sleeping with the rector (married, don’t worry!)

Well, when the Feast of St. Mary Mag lands on a Sunday, it might get its due, but even then I wonder.

The reputation accrued to this gifted and faithful disciple of Jesus is worthy of vice-squad attention, despite the fact that it is not supported by biblical witness at all. It happened because of hierarchical resistance to lay preaching and patriarchal resistance to women leaders. Mary Magdalene, in a favorite story of mine in John 20,  stoops to peer into the empty tomb, weeping and looking for the body of Jesus, after the others had gone home. She turns away finally and has a direct mystical experience of Jesus the Christ. He tells her: noli me tangere (Latin for, don’t hold onto me.) This phrase was later interpreted to prove that Mary was a clingy and hysterical woman, and that therefore her testimony to the new vision a sham.

On a retreat, I prayed with the tomb scene, imagining myself as Mary and identifying with her grief. It sent me into fresh grief over the death of my father. He wasn't Jesus, of course, but in soul-talk such particularities don't matter.

It’s a miracle that Magdalene’s influence as a leader and teacher survived at all, and that the gospel she wrote has been translated and remains in print. There’s a great scene in it in which an angry (jealous?) Peter, incredulous that Jesus would have revealed so much to a woman, argues with her. (The Gospel of Mary, translated by Karen King is worthy of a read. The scriptural texts more kaleidoscopic and impressionistic, not news at 11. The more I read, the more I think, the more I want, the closer I feel to the Holy. All of it feeds my soul. King, btw, is a scriptural scholar at Harvard Divinity School and an Episcopalian.

Please note that Magdalene’s bad reputation did NOT follow her into the Eastern Orthodox tradition. So what’s with the West? Long story. Look it up. Think P for pope.

Consider this, should you doubt the veracity of ancient testimony: if women hadn’t already been functioning, historically, as leaders in the early church, their presence wouldn’t have been recorded in Scripture at all, now would it?  Mary Magdalene is alive and well.


Every July 22nd for many years now, my feminist priest husband and I, have attended the Mary Magdalene Event at Boston College, School of Theology and Ministry.  The event is made possible by a woman of worth, both financial and spiritual, and the guest lecturers are always among the very best women scholars and theologians. This year we heard S. Mary Catherine Hilkert, O.P. of Notre Dame. Next year’s speaker will be Amy-Jill Levine, Jewish theologian and professor of New Testament theology and history at Vanderbilt. Every voice counts.

I got to shake hands with one of my favorite feminist theologians, Elizabeth Johnson, CSJ, professor at Fordham. I felt like a groupie. Imagine! Who runs after women theologians? She gave me a vigorous handshake, grinned, and, upon hearing that I was an Episcopal priest who’d had ordination struggles with the patriarchal church, said: “Well, we are all still working together on this one.”  I wanted to hug her— but opted for boundaries. 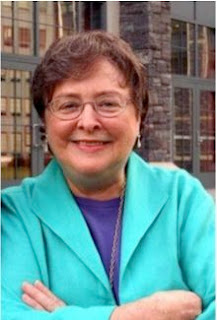 The event began with a liturgy at the Church of St. Ignatius Loyola. The opening hymn, sung to the familiar tune, Old Hundredth (The Doxology) from the breviary of St. Helena's, an Episcopal Women’s Order, choked me up all the way through. I was expecting it. I knew it. I’d sung it. And yet I cried.

1. Out of the night where hope had died,
to tomb once sealed, now gaping wide,
the Magdalene made haste, to mourn
and bring her spices through the dawn.

2. She gazed in disbelief and pain
where Jesus in his death had lain,
until the radiant angel said,
Seek not the living with the dead.

3. Soon trusting love cast out her fears;
she rose and brushed away her tears.
As first apostle, Mary ran
to tell God's resurrection plan.

4.  Jesus is risen! Mary cries,
Lift up your hearts and dry your eyes,
Jesus is risen—come and see—
and goes before to Galilee.

5.  All glory be to God above,
for Mary's apostolic love,
all praise to God whom we adore
for ever and for evermore. Amen.