I swear, a little pinwheel popped up spinning from the small white invisible zucchetto on my impious one-time Presbyterian head when I heard the unitive words Pope Francis spoke to our country and our Congress. 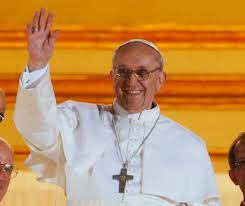 We in religions, and we in all other fields of endeavor, so need the voice of a big fat old religious visionary with an impish grin and a conspiratorial wink who advocates the Golden Rule as the chief guideline for church and world politics. The pope's words were unquestionably grounded in humanitarian-spiritual values which sustain viable life on earth: peace, justice, love, generosity, hospitality, respect, open-hearted mutuality, discernment, wisdom—and Love. His actions, ie. dining with the homeless, rather than attending the elegant banquet in his honor, followed his words. with action.

Pope Francis I addressed the assembled U.S. Congress on Thursday September 24th. He began by expressing his thanks and his joy at being in “the land of the free and the home of the brave.” He ended with: "God Bless America!" I was all ears, all heart in hope—hooked. This was the first time ever a pope has addressed our government assembled, and, thanks to 21st century sophisticated communications, the word got out!  He stood out, all dressed in white as he was. The sight was almost laughably symbolic. Seeing and listening brought back to me my old Catholic yearnings.

When I was a teen I set out to explore religion, curious to see if there was anything more out there besides skyscraper pulpits with men in them—preaching and praying as if they owned the whole spiritual territory. Okay, I know it was in the 50s, but I was restless with the status quo, believed firmly in a God who cared for me and everyone everywhere, and felt sure my behind would atrophy from sitting in a hard wooden pew every week—receiving, receiving and receiving—words, words, words. Even Holy Communion was passed out to us as we sat in the pew. God made me a body, a body I longed to move!

Looking for movement of some kind I went to a Catholic Mass. Behold! People moved their bodies—stand, bow, bend one knee, kneel, move their arms swiftly across their bodies more times than I could count, walk up the aisle to get bread popped into their open mouths. The only thing these RC’s didn’t do was participate orally in what was going on, because it was in a language only the priest knew. (Still, many of them murmured their own Mass prayers, using strings of beads to guide the process.)  This worship was still passive/receptive, but at least they moved!  AND they worshiped a woman named Mary who stood up front— in a statue and bad art but clearly female.

The Catholics had stuff I wanted, stuff that involved my body, which I had learned was important because Jesus Christ had one. I took instructions to become Roman Catholic and found out they also had all the answers, which I deemed baloney. I uncovered some basic rules I knew would imprison my bodily freedom more than any of those awful girdles we used to wear.

In order to breathe, move my body in worship, keep asking questions, and, in time, be ordained priest, I joined the Episcopal Church. It had all the embodiment I needed, as well as hope for women to be up front as flesh and blood, not just as immobile, obedient, holy statues. I’ve happily been an Episcopalian for 55 years and an Episcopal priest for 27 years. I can breathe, speak, and question without fear, thanks to its flexible authority system. It gives my spirituality sanctuary.

RC’s do not have a flexible authority system, yet I heard this pope, definitely RC, calling for us to engage in dialogue, pray, and wonder out loud together about new approaches to life-threatening problems, such as poverty, climate change, unequal distribution of wealth, unfettered capitalism, territorial possessiveness, and paralyzing political polarization. His language was not harsh. He did not come to chastise, but to bless and to encourage. You can do better; you can be better when you accord your neighbor the same dignity, treatment, and respect you would like for yourself.

Just the other day our dear Jewish neighbor said: “Look, all those little flowers are growing up right through the brick and concrete of your stoop. I know it’s because holy people live here.” (She was referring to me and my husband, both Episcopal priests.)

I said, “All people are holy.”  That conviction comes from my own early spiritual experience and from what the Episcopal Church/ Anglo-Catholicism gave me: a sacramental theology by which I know that all the created order is in the image of God and reflects divinity.

She retorted: “Lots of people don’t seem holy to me.”

“Well, often it’s thickly disguised!”  We LOL’ed, as they say.

I haven’t forgotten my wannabe Catholic phase. With this pope’s presence and unitive message and style, his soft tone, authentic feelings, especially about suffering and children, and the bipartisan language he used, I felt it again—not the impulse to become Roman Catholic, but to know again the basic unity underlying all Creation, the goodness intended for us all, the common good of all living things for which we work and pray together, the true meaning of catholicity.

There are many reviews of the Pope’s speech and many have noticed he is not exactly offering to alter teachings that continue to imprison women’s bodies— and souls. Nor does he speak much about the abuse scandal. Yet and still, his approach values dialogue and open-mindedness, and non-dual thinking. There is no righteous over against unrighteous, immigrant and non-immigrant—no polarization of such moral values into absolute closed categories. Life is more fluid than that, and life requires room for transformation at all levels. I think this Pope is laying some groundwork for such transformation even in his own religion.

Applause went back and forth on both sides of the Congress. Imagine bipartisan applause in this Congress, and for the same speaker!  Who could argue with the Golden Rule?  There is a reason why it is called golden. It has the highest value—spiritual not monetary, please—and it's multi-faith.

But the Pope’s visit was more than just a prophetic analysis of the United States or a call to action, it was symbolic. The papal office carries heft, both historically and morally. The visit tells a new story. It means we must listen up. What I heard is that how we treat each other matters more than anything else. Are we decent? Do we listen with care to ourselves and to others? Do we resent our neighbors, near and far? Do we hoard wealth? Do we act from fear more often than from compassion? Do we listen to our own and others' stories? Because every individual has a story which matters intimately to him or her, and each story is a building block in the common good.

Author Brian Doyle writes: "I don't have any words that carry real weight. All I can do is tell you about it and somehow that's a prayer too, you know what I mean? Every story matters more than we know, or we ever will know—but at least we know that."

It was a nice coincidence, if such it was, that the Pope addressed the U.S. Congress the day after the Jewish high holiday of Yom Kippur.  Yom Kippur is the end day of a time devoted to teshuva: self-examination, turning around, an effort to  realign your self with God. The Word, according to the Hebrew Bible's Deuteronomy, is not up in the heavens or out over the sea, but very close to you, "in your mouth and in your heart to do it."

To quote Rabbi Rachel Barenblat, who blogs as The Velveteen Rabbi: “Without change, there is stasis, and stasis is death. Yom Kippur comes to remind us that our habits of body, heart, mind, and soul become calcified and constricting. That each year we miss the mark in our habitual ways, and each year we have the opportunity to break free from those habits and become someone new.”

The Pope praised the American capacity to dream bold dreams—a gift. We have been successful with many dreams, but have we turned our successes away from hopes and dreams and into an ethic of domination, an identity of privilege, and overweening pride of place?

Should we desire to change, do teshuva, we can. After all, we have a papal blessing.