On February 4, 2018, I delivered a homily at the memorial Eucharist for the Rev. Pierre Wolff, Episcopal priest, Jesuit-trained, and my spiritual director for fifteen years. I began my homily, which was a letter to Pierre, with a quote from the founder of the Society of Jesus, St. Ignatius of Loyola (1491-1556), a soldier, born in Basque Country, now Spain. Ignatius, while recuperating from his wounds, experienced visions of Christ. The soldier in him helped the mystic in him design the ingenious Spiritual Exercises.

“We are created to live in God’s love and life for all eternity.”


I am not a soldier, a mystic nor a genius, yet my spirituality was deeply formed by two geniuses—one I knew well and one I knew by proxy. Their stories and mine intertwine.

Pierre Maurice Wolff was born in Marseilles France on November 2, 1929. He lived through the second world war, served as a French Jesuit priest, giving the Spiritual Exercises and retreats to the Sisters of St. Joseph and lay people. In the early 70's, Pierre came to the States to do the same type of ministry with many communities. In 1988 Pierre married Mary; they made their home in Wallingford, Connecticut. Later he became an Episcopal priest, continuing his ministry, and authoring numerous books. His first book May I Hate God? is a favorite of mine.

I began my memorial homily with Ignatius’s words, because Pierre had drummed them into me. They were the Principles and Foundations of Ignatius’s Spiritual Exercises. “We come from God/Love; we return to God/Love; we live in God/Love supported and sustained every moment of every day,” Pierre said. The spiritual life was not a journey with a goal, but rather an everyday process of living, breathing, being IN that Love. I agreed—intellectually.

It was 1989. I had just been ordained an Episcopal priest. I had done retreat work with Pierre since 1983, and had just officiated at his marriage to a former Sister of Mercy, Mary Morgan—another whopping story for next week’s blog. I had fought with the Church Jesus did not found. A chaplain colleague had told me that if I wanted to get to know Jesus I had to get a Jesuit. Then she had one for me, one fresh from France no less. Fantastique et merveilleux.

Now I was ready to meet Jesus on the ground—beyond my sentimentalized Sunday School Jesus, simperingly sweet, and born Christian. As a chaplain in an alcohol/drug rehabilitation treatment center, I had to get the God-thing across without mentioning God or anything religious. Thus  . . .

I was to pray daily for an hour. An hour? Who prays for an hour all alone and in silence? Pierre gave me some scriptures to use and told me to jot down my feelings in my prayer journelle. First feeling, anxiety; on its heels, anger. I groused to myself: I’m a working woman. I have a job! I have to be there by 8:30, latest. I say my prayers in the morning and evening, but a whole hour? I go to church every Sunday. Come on!

My resistance persisted. Prayer was an almighty inconvenience. Every single day and for a whole year? I felt sure God would not want me to interfere with healthy sleep, let alone my job, ministry of course. I shelved this prayer assignment, feeling quite righteous and right. Never once did I consider actually praying to God about my angst and pique. I would ask Pierre to alter the schedule. A reluctant pray-er is worse than a reluctant suitor. And so, amen.

Then one evening I set my alarm for 5:30 a.m., an hour before my usual wake-up blast. I don’t know why I did this, hardly remembered that I did until the next morning when the alarm went beep-beep-beep—staccato summons. I jumped up, padded into the bathroom, splashed water in my face, moved quietly and quickly, so as not to awaken my husband, into the bedroom we weren’t using as a bedroom.  I sat down in the comfortable chair and stayed there for an hour—quiet and alone. This was my first personal experience of a miracle—sheer grace. Nothing within my conscious reach could have made this happen. Not me.

Pierre, whom I now saw weekly, wondered tactfully if God made this happen. Where was my stubborn independent, first-born sassy self?  Had I made a mistake and turned obedient?  Nonplussed, Pierre gave me instructions: scripture readings to pray with, which meant not just skim. “You will keep a chart of your consolations (uplifting feelings) and desolations (the downers) and also make two columns, one labeled "daily life" and one labeled "prayer life." What is happening in each? The parallels were uncanny.

I used graph paper and drew soaring ups and downs. One of the first scripture passages to pray with was Jeremiah 13, something about girding the loins, with a loincloth no less—or more. You can imagine where that took me! I was deeply uncertain about my vocational direction, was newly married for the second time, still sought the perfect orgasm, and prayed like mad that all my kids would still love me.

Still, it took time for the whole truth of this God/Love to, well, sink in. I no longer, ever ever again, would imagine my faith life as a straight-lined journey with God at each end: Creation (coming from God) to Resurrection (going to God) and not so much in the middle, the daily trek and grind. Or, if God was in the middle it was by some kind of intervention that felt miraculous. Jesus the Christ would, it turned out, have much to do with the murky middle. I hung in with him, walked with him, stayed IN step with him.

You know what assured me? One little word in Ignatius’s sentence: IN. I knew God was IN me but I’d never thought of myself being IN God—and not only IN God’s love but IN God’s life as well. This was Ignatius's genius. The mere mention of his name awakened Pierre, even in his old age and fading mental capacity. He would enthusiastically exclaim: “Ah this man, this Ignatius, is a true genius, Genius!” I have no doubt myself.

Try as I did I could never figure out exactly how Ignatius’s prayer exercises worked, how the seemingly rigid, almost military, structure of simple biblical texts, coupled with an hour of prayer each day, worked to shape and transform my soul.

Genius means this: a qualitative blend of love and intellect that passes from one to the next and never dies. Such genius is never the property of a single person. It is mobile, its wisdom eternal.

Here is Ignatius, whom I affectionately call Iggy. 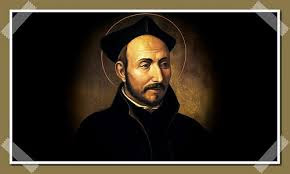 I think Iggy looks like Pierre. Well maybe not quite, but allow my projection. That's a necessary psychological strategy for all hopeful spiritual aspirants like I was— and still am.

“We are created to live IN God’s love and life for all eternity.”