Advent is nearly over and I am late with this post. Still: I want to remember with you Mary’s first response, the one for which she is less famous. When the angelic vision informed her that she would become pregnant, though a virgin, and bear a son who would be, in today’s lingo a spiritual rockstar, she  said: How can this be?

Mary’s older cousin Elizabeth, through angelic vision to her priest husband Zechariah, found herself suddenly pregnant in her old age.  Both asked the same thing, and variations thereof, that Mary asked: How can this be? This was her first wonderment.

How can this be? is a wondering question. It is an Advent question and a daily question— both in those days and in these days.

How do we find enough stamina and  courage to carry on when unexpected, startling, confusing and challenging things happen, whether good or not good, tragic or miraculous? We are rendered powerless, and we wonder: How can this be? Where is God? How will I cope?

One brilliant way we cope is simply to tell a heroic story, personal or communal. Most such stories tell of a God of spectacular reversals. Such stories are remembered and told over and over and they keep us in hope. Everyone has a heroic story. The Bible is full of such stories. We wonder and still say together: How can this be?

Luke's gospel tells the whole story of the birth of Jesus Christ and its prequel. Here’s what Mary did after accepting the inevitable facts of her condition and before marriage or birth: she set out, presumably alone, or at least no escort is reported, to cross the barren hills to visit her cousin Elizabeth. How can this be? Both women believed God was involved somehow, and both were scared in their vulnerable circumstances. The biblical story is called The Visitation. Here is The Visitation icon written by Benedictine nun Sister Marie-Paul. She was born in Egypt of Palestinian origin and Italian descent. She now  lives in a small community of French-speaking sisters near the summit of the Mount of Olives overlooking the Temple Mount in Jerusalem. 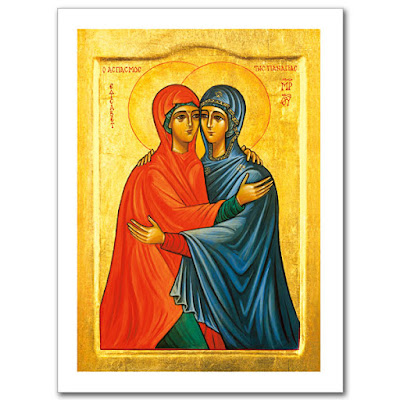 Mary and Elizabeth embraced and talked to each other. They shared all their thoughts and feelings, all of them. This is a common practice women have, often before acting. They get together and talk about the best and the worst. I call my women friends right away when I'm befuddledWhether we agree or not, we listen to each other, and more often than not derive no secure answers, except through the connections we make and the stories we tell, there comes necessary strength to carry on. How can this be? I have no idea.  I wonder.

Children are expert wonderers. Here is a recent and true story of one such child. I dedicate this true little story to a dear friend, a woman whom I have named the stealth evangelist. She is in California now visiting her son and daughter-in-law and their two sons. The oldest is a boy named Jack. He is just six and he loves it when his Grandma reads him stories, mostly because Grandma has  time to reflect with Jack, to have a conversation about the story they read. Many times Grandma has read  Jack a book by Eton Boritzer called What Is God?  The book illustrates in words and drawings the basics of many world religions. All of them have a special prophet/leader/founder. All religions conclude that God is Love. The Christian prophet/founder is Jesus Christ. Jack knows that he is a Christian, but has not been to church much. He wonders—a lot—about this Jesus.

This Christmas Grandma decided to tell Jack that Christmas is when we celebrate Jesus’s birthday. Jesus was born at Christmas.  Jack’s eyes flew open. He looked at Grandma with an expression of wonder and incredulity and said: No!  (Jack’s version of how can this be?)

Jack is on wonder overload now, and Grandma is empowered. They are now reading the biblical story in Luke 2.  Jack wonders about everything, chiefly mangers and angels, and he says: “Read it again, Grandma. Read it again.”