Today would be my dad’s 101st birthday. Happy Birthday Dad.

Dad was a perfectly imperfect father for a “Mad Man” (TV show, not insane asylum.)  I loved him and longed for more of him all the time, and all our life together.  He died at 71 way too early for the length of my love.

Sometimes as a child I’d stand at Dad’s side and silently yearn, hard enough I imagined that he would turn from his preoccupations and take me onto his lap. Sometimes he did.

Today is also the day when I entered Hartford Hospital 45 years ago to have labor induced for the birth of my third child, already overdue by two weeks. It was August—too hot to be so huge.  I persuaded my OBGYN that this child should be born on Dad’s birthday.  That was my idea but son Rob refused to come out. He waited till August 31, then came with a rush and a hemorrhage and a loud wail, mercifully strong and full of presence. Happy Birthday Rob.

Cheryl Strayed the author of an exquisite (Oprah aside) memoir Wild, hallows the value of good fathering.  She once strayed into a therapist’s office and announced flippantly, “I’m like a guy sexually.”  Detached.  The therapist listened then asked, “Who detached from you?”

Was this where she was supposed to tell him about her father? As she dove into the dangerous father topic of severe violence and equally severe absence sprinkled with endearments,  she stared at the familiar poster of a whirl of white in a black rectangle. It was meant to be the Milky Way in the middle of which was an arrowed sign that read, You are here.

The question threw Strayed into confusion: “I couldn’t land on love or security, confidence or a sense of belonging. A father who loved you as a father should was greater than his parts. He was like a whirl of white on the You are here poster behind Vince’s [the therapist] head. He was a giant inexplicable thing that contained a million other things, and because I’d never had one, I’d feared I’d never find myself inside that great white swirl.”

Dad held me as the apple of his eye, enough that I knew I am here. And Rob’s children know We are here because he loves them the way a good father should. 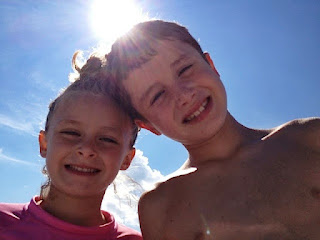