Many people have deep soul-convictions that shape their lives from the beginning and get more courageous and more sinewy when threatened. Such was the case for Nelson Mandela when he was imprisoned for treason during the hard struggle against the apartheid politics of the South African government. Mandela spent 27 years in exile, some of it at Robben Island in hard labor.

Mandela’s story is complicated, just as any story of someone who struggles with spiritual ideals and cold hard reality and falls down many times along the way is. Nevertheless, he was a man of conviction and spiritual strength. While imprisoned he was offered his personal freedom once. He refused  to comply with the condition that he unconditionally reject violence as a political weapon, saying: “What freedom am I offered while the organisation of the people (African National Congress) remains banned? Only free men can negotiate. A prisoner cannot enter into contracts.”

Mandela emerged after much negotiation, including international protests, and pain to be elected as South Africa’s first black chief executive in 1994. 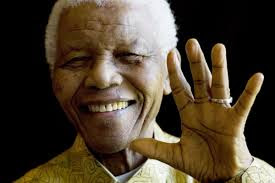 Mandela subscribed to basic democratic values and the African ethical tenet, ubuntu: “A person is a person through other persons.” Mandela died of respiratory illness in 2013 at the age or 95. He was not a model of moral rectitude or religious rigor, but he was a man of conviction. How? Well, in part because he kept this poem alive in his heart as a mantra, a prayer with which he strengthened his soul.

Out of the night that covers me,
Black as the pit from pole to pole,
I thank whatever gods may be
For my unconquerable soul.

In the fell clutch of circumstance
I have not winced nor cried aloud.
Under the bludgeonings of chance
My head is bloody, but unbowed.

Beyond this place of wrath and tears
Looms but the Horror of the shade,
And yet the menace of the years
Finds and shall find me unafraid.

It matters not how strait the gate,
How charged with punishments the scroll,
I am the master of my fate,
I am the captain of my soul.

The wisdom of this poem is true for me, up to a point. As I age and face my own convictions,  the mastery of my soul has withered. I of course am neither as strong or as bludgeoned as Mandela was, but when I read “Invictus” I said yes, then, not convinced, and being a word-nerd, I looked up the word roots, Latin of course.
Invictus means conquered from within already, and therefore unconquerable from without. Invictus is I. Yes, I was conquered from within like Mandela.
Convictus means conquered with (con), not alone, like with a close friend or intimate association. Convictus is WE. Yes, I was conquered by not feeling alone, because God was there. We are masters of my soul.

From the vastness of the sea,
the endless stretches of sand,
I am drawn into one drop, one grain—
my own.

I am not the master of my fate,
the keeper of my soul
as I’ve spent years imagining—
and forgetting.

Thus . . .
all my words
my deeds
my thoughts
are convicts—
escapees, convicted anew—
over and over, daily.


BLESS AND HALLOW EVERY LIVING THING EVERY SINGLE DAY. AMEN