She never gets her day, officially July 22 on the liturgical calendar. Rarely does a parish Eucharist devote a sacred Sunday to this biblical woman of ill repute and holy stature—at once. This contemporary woman, myself, always lobbied for Mary to have her day on a Sunday, transferred if necessary. I persisted and sometimes I got it, for Magdalene and me.

There’s no need to go into a lot of history or theological reflection about Magdalene being the first witness to the Resurrection of Christ, and therefore the apostle to the apostles—beating the men to the punch. We’ve beaten her drum to death. Still, she intrigues me. She was the one Mary who loitered, sometimes in the shadows and sometimes brazenly up front, bent on following Jesus around like a pet lamb. Well, that’s not a very complimentary metaphor, but truthfully that’s how it looks in the biblical stories. That’s also how it looks in 2018—women loitering  in the background, visibly or not—shadow forms in photos of gathered groups of men who run the state, the church, the government, the corporation, the university, the cosmos!

But Mary hung out anyway. She reminds me of myself, not willing to leave in case there is something more to see or to learn or to know. I linger and loiter with steadfast irritation. So, like Mary, I’d peer into an empty tomb just in case the one I loved and followed and tried to imitate was still in there. And I'd keep watch for a long time. 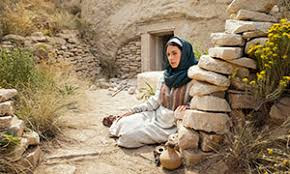 In the biblical story Mary hovered, weeping in front of the empty tomb, but then she turned at the sound of her name. Hey, Mary, look over here. She thinks he’s the gardener at first. But he calls out: I’m here. It’s me. I’m in ghost-like form and you can’t hug me or touch me.

Unfair. But Mary gets to run quickly and tell the others she’s seen the “risen” Lord so they can discount her idle tale as they practically run over her racing toward the tomb to see for themselves.

Then I would go outside into the world where I live. There I walk and look carefully, scrutinizingly, suspiciously at every single minute slice of visible, tangible, audible, smellable, tasteable, breathable stuff—and yearn. That’s how I grieve. That’s how I keep going. That’s how I re-up for life. That’s why I need beauty—in sanctuaries: natural, religious, secular— every day. It’s a forever thing.

How is it for you?