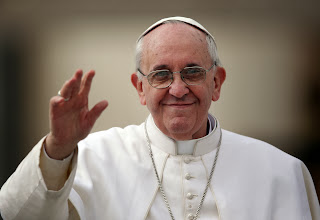 Well, I’ve never been much for Beyoncé but I do chuckle at the pop-star stats Pope Francis I is piling up— more than Ms. "Gorgeous" sex symbol herself.

Some people retain their holy right or rite of caution, if not cynicism, but most are enjoying the fresh air of hope brought by the new pope. Hope is believing there is a future. Hope to me is the most valuable spiritual gift there is. It changes the world. You can't give it to yourself but you can embrace it when it comes your way and say: I live you for today.

To have a sane public religious voice that is not banging away with atheistic fervor, or braying about his or her own version of God, or being anti-religious for its own sake in a secular culture it precious—and bodes hope.

We all know that organized religions has fallen head over heels in love with itself, so much so that at times it has been seditiously narcissistic, cruel, and deaf.  And  we know that there is nothing more lethal to the human soul than a huge institution with too much power under its almighty skirts. Poof! You could disappear.

Not one thing, not even an institution, is beyond transformation, however and however.

Mama Catholic Church is emerging from her closet of tyranny and shame and dragging all religions with her. The Pope is a principle symbol of this great emergence. It's time to retell the world the basics again: the good news that God loves ALL living things, and that the grace of God and the good will of humanity working together are able to turn around, even a behemoth, or an ant, or a waif, or a wild consumptive weed, or a Scrooge-like Wall St. billionaire, with a belly protrusive and obtrusive, or a beautiful young woman who thinks she's ugly.

There's much rich spirituality, wit, integrity and theological heft in the Pope’s interview with La Civilita Cattolica, the journal of the Society of Jesus in Rome and translated for America the Jesuit magazine here. It exudes hope and mercy. Link: http://www.americamagazine.org/pope-interview

Here are some facts that make me believe that something new is happening and bevel any tendency to skepticism I have in me...............
-The Pope granted this interview and was transparent about every topic imagineable
-The Cardinals, the hierarchy of power, elected him.
-He is the spiritual leader of the largest religion in the world.
-The media is paying attention, for once not to point out hypocrisy but to laud integrity.
-He is very informed and enthusiastic about the spiritual power of the Arts, Creativity.
-He identifies himself as a sinner and will not be talked out of that self-identification.
-He says he used to be too authoritarian and swift to make decisions but now he is open: “A big heart open to God” the interview is entitled.
-He wants  the Church to be a big tent not a little cozy elitist chapel, like an ingrown toenail (my metaphor hot his).

-“We must investigate further the role of women in the church.”
-He says he has never been a “goody-goody” and never a right-winger.
-This pope wants to think WITH the church.
-He loved his grandmother whose prayers formed him.
- He lives in humble quarters in order to be near the people. "I can't live away from people." The traditional papal apartment in the Apostolic Palace has too small an entrance “like an inverted funnel,” he said.

The Second Vatican Council seems resurrected in this Pope’s words. Some people are upset that he does not declare any big doctrinal changes or focus on issues about which there is argument (abortion, women’s ordination, open communion, gay marriage) My issues!

Francis is right to say that the church has become “obsessed”with such arguments and forgotten that it raison d'etre is to “seek and find” God in all things. We’re out of balance, he said.

I did not feel reprimanded, just reminded.  No, it’s not doctrinal but that’s the point isn’t it?

And of course I loved this papal statement: we are not to “tame” problems but live on the border and be “audacious.” (A small permission to hang onto my own cheeky little voice.