Why would a book review bear a title that directly contradicts the book’s own title: You’ll Like It Here?

Because when six-year-old Donald Vitkus, an abandoned orphan and rejected foster child, arrived at Belchertown State School, in 1949 he was told a lie: “You’ll like it here.”

Young Donald recognized this deceit because of the rough way he was treated, his desire to “puke”, and because this putative school had bars at the windows and padlocked doors. “School” was a misnomer for Belchertown.

You’ll Like It Here. The Story of Donald Vitkus Belchertown Patient #3394 is Vitkus's biography, written by Ed Orzechowski, a writer and retired high school English teacher in Northampton, Massachusetts. The memoir exposes the painful irony of its title by telling the whole truth: a story of tragedy and triumph.

The tragedy is that Belchertown existed for containment only—not care, not education. It stayed in business under state auspices for seventy years (1922-1992)—even after a 1973 Federal class action lawsuit against the institution’s leadership for cruelty and dehumanization. Children and adults, commonly diagnosed as “idiots”, “imbeciles” or “morons”, lived under inhumane, unstintingly cruel conditions.

The triumph is that some of Belchertown’s designated “retards” proved smart enough to make friends, humor, pranks, and plots. They knew damn well what was happening to them and what terrorism felt like. Vitkus was one such kid. He felt increasingly sure he was not a moron and secretly determined that one day he would prove it. His inner determination eventually taught him the right balance between risk-taking and compliance so that in time he was free from institutional control—
but not before some runaway attempts.

Belchertown took regular photos of all the patients and distributed them to the local police so runaways would always be apprehended and returned. Vitkus’s first runaway attempt happened on August 7, 1953, when he was ten. He had no place to go and no family in sight. Written recurrently on every entry of Vitkus’s case files was this painful sentence:“Does not receive mail or visitors and does not go on vacation.” 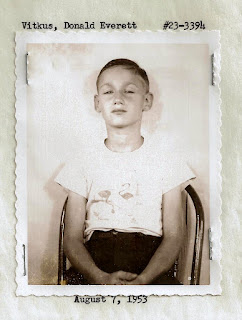 One could call runaway behavior desperate, foolhardy or just plain natural chutzpah. Vitkus always was caught of course, yet he never gave up. Once a compassionate policeman took this child for ice cream before he returned him to Belchertown. One ice cream is heaven when you’re in hell.

Life after Belchertown, though less breathtaking, had rough patches but just as many graces for Vitkus, not the least of which was his meeting Ed Orzechowski in 2005 at an event to publicize a book called Crimes Against Humanity and asking Orzechowski if he would be interested in writing his story. Orzechowski agreed to a  conversation. That conversation would turn into eight years and some forty hours of taped interviews, not to mention patience, courage and yes, affection. The men collected official records and documents to prove their book was not a work of fiction. This book is uniquely the product of a relationship of trust between author and subject, a relationship that gives this book its integrity and intimate worth.

Orzechowski listened very closely in order to write the story in Vitkus’s voice. At times he felt as if he were “channeling” Donald. The process wasn’t easy, Orzechowski told me when I contacted him. “I first had to learn to write a book,” he said. “But Donald pushed ahead, because he never wanted ‘to go back to those days.’”  It’s not easy to write someone else’s memoir and make it vibrate with a voice not your own. Orzechowski writes with exceptional craft, skill, and clear-heartedness.

Sometimes a memoir helps a person, not to forget or resolve every painful memory, but to give a lived experience shape, form, and right words outside one’s own mind—contained, shelved and ready for others to read and find empathy and hope. A memoir can be a kind of miracle this way. Vitkus had first to entrust his whole story to a stranger. He wanted others not to feel alone in their truth, and most of all, he wanted to prove he was no moron. Donald Vitkus as an adult in his late sixties is pictured here.

Vitkus lurched clumsily toward happiness as he grew in body, mind, and spirit in spite of having grown up deprived of affection, adequate health care, and most all of life’s most urgent basic lessons from table manners, to language, to pubescent impulses, to the meaning of love—save the inner longing that signals love’s absence. We are not left with the impression that Donald is free of all his scars. He still has a strong aversion to authority. In his efforts to manage life outside he flounders. And he still sleeps with the covers over his head.

What saves this book from being mere reportage of atrocities for the sake of news:
-tight structure including compelling chapter titles, often quotes from Donald or his case records;
-the redemptive quality of the biography-as-memoir genre itself— characters, dialogue, plot—supported by documented facts and photos;
- a protagonist with exceptional chutzpah who also managed a gentle, respectful touch when he stripped and washed the younger boys for their weekly shower night;
-a simple pencil posing as a godsend—just one pencil given to each first grade student. Donald had never experienced the thrill of ownership: “mine.” He took excellent care of his pencil;
-some kind teachers who cared about patients as much as Vitkus did about his very own pencil;
-transformation of a life nearly sunk by trauma;
-a writer who never allowed his own emotions, which would have to have been painful, overwhelm the plot or the truth of his subject.

Orzechowski may just have discovered his retirement vocation. He is beginning interviews with another former Belchertown patient who sought him out. Hopefully, some women will come forward as well.  Orzechowski told me: “Since I know the ropes much better now, I expect the process to be considerably shorter this time.”

Today, as Ed Orzechowski promotes his book in readings and presentations, Donald Vitkus attends every single reading. Vitkus, for his part, travels and speaks publicly about his experience. He is Vice-President of Advocacy Network which evolved from Friends of Belchertown.  When he  introduces himself he begins his talks this way: “I’m a human services worker, and a Vietnam vet who can’t own a gun. I am an ex-husband, a husband, father, and grandfather. And a former moron of Belchertown State School.”

Here is Donald Vitkus with his present wife Pat at his graduation from Holyoke Community College in 2005. 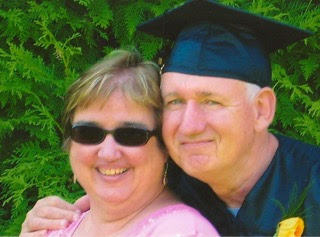 Readers of this book will find faith, hope, love, and grace. Darkness and light co-exist, neither overwhelming the other. You’ll Like It Here is ministry—restoring dignity to the innocent and exposing larger social justice issues with universal implications.

Ed Orzechowski, by the way, has also proved he does know how to write a book.