Have you ever wondered if Godde was in the whirlwind as much as in the still, small voice? Ever thought of God as chaos? Oh no, God is order and harmony! God subdues chaos. God speaks, and presto!—there are firmaments, stars, all kinds of vegetation, critters galore, and finally the piece de resistance: Us!  Ta daaa!

That’s what I grew up believing. Chaos is bad, but luckily, God always brings good order out of bad chaos. It was not until, what do they call this age?— my ripening years, that I questioned that view. What if chaos were not endemically bad?

I said this once in an EfM group and a friend who later was ordained priest had a strong reaction. In fact she exclaimed loudly, “Oh no. God brings order out of chaos. Chaos is not good at all.” I shut up. I could understand her point of view as a recovering addict. AA often turns God’s name into an acronym standing for G(ood) O(rderly) D(irection).

So there!  Yes, but.......does that mean Matter is endemically bad and Spirit is its remedy?

The Rev. Martin Smith on a recent retreat spoke of the “new gnosticism.” He meant the dualism,  between matter and spirit: the all good and all-powerful Spirit and the all-bad, inferior helpless, if not formless matter. Smith announced provocatively, “I preach Materiality.”

I have preached relationship theology. On odd Mondays I get fearful that I’m arrogant, making humanity near-equal with divinity. Humanity and divinity are not equal or the same, yet there is an up close and personal connection—like a mutuality of desire working together. Sometimes, however, I think we humans assume that our own will is very far from, if not opposed to, Godde’s will. I wonder. My essential will is that I may be as healthy, life-engaged, and full of compassion as I can be for as long as I may live. God’s will? Likely the same as mine for myself. You?

One could get all ego-centric about this symbiosis, but beware. The view of opposing wills and desires sets up a dangerous and false split between spirit (all good and all-powerful, named God) and matter (formless and worthless in itself, named Man...nary a woman in sight). Over time in religious traditions and beyond, God became masculine and superior, and Matter became feminine and inferior. This is ungodly politics, and for an ungodly number of centuries.

Catherine Keller, Professor of Constructive Theology at Drew University, in her book, The Face of the Deep, A Theology of Becoming, makes a well-supported case that biblical creation is a beginning. The beginning is a relationship between the heavenly/up-there and the earthly/down-here that will evolve and unfold in many complex ways over time. Matter matters.

I'd say we are not divine, but we are divinely equipped to stay in this chaotic relationship. 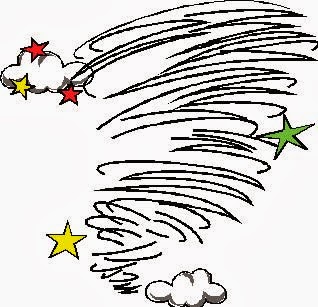 Novelist Chaim Potok began his novel, In The Beginning, “All beginnings are hard.” Well no kidding! Remember your first day of school, first date, first cooking disaster, first realization that your kindergarten teacher actually went to the bathroom, first experience with death? My first labor pain, my first birthing, my first book. A friend of mine remembers the first time a date exposed himself (flashed it all)— his “subtle” way of asking if she wanted sex. At 12, she was so appalled at the sight she threw up all over the poor guy, and his member.

If, as Keller and other scholars suggest, evolving life is dynamic—an always-unfolding process of non-linear multi-dimensionality. We have a model of perpetual becoming—a theology of becoming. I find this appealing and scary.  Is nothing secure? Who is in charge in this model of permanent becoming?  It feels like a whirlwind—all churned up.

“Whirlwinds in meteorology are complex chaotic systems that suggest not pure chaos but rather turbulent emergence of complexity at the edge of chaos.”

Complexity emergent, just the beginning of something new—all the time? So chaos is not pure, eh? So this is how Spirit and Matter interact?

Listen up! The answer, my friend, is blowin’ in the wind.