This week we went to a Holy Eucharist and Secularization of St. John’s Memorial Chapel on the Episcopal Divinity School (EDS) campus. I wondered anew about the distinction between secular and sacred—maybe not so binary. It was sad and somehow defiantly hopeful as the spire pierced the bright blue sky as if to say: I will always be here even when I’m not visible.

There are many better photos but here is the one I took the day of the memorial. 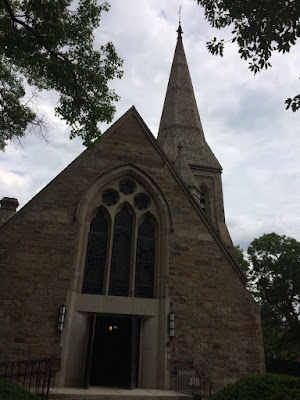 It seems odd to me that I had so much feeling. I was not alone. Memory sobbed in the air. This 1967 statue of Christ in the Garden of Gethsemane, sculpted by Walker Hancock in 1966 in memory of Jonathan Myrick Daniels, EDS student who would have been graduated from EDS in 1966 had he not been assassinated in Alabama while trying to shield young Ruby Sales, said it all: a beloved school is closed for reasons uncertain. Now the chapel will find another use. Christ grieves with us. 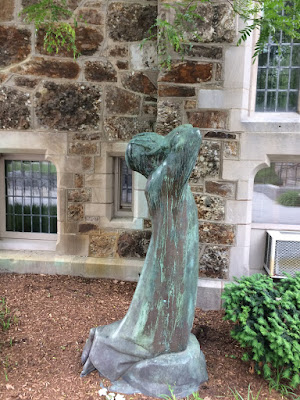 I am not a graduate of EDS, though I took a couple of courses there and visited when I was exploring seminary education back in the 1970s. I chose Yale Divinity School mostly because I could commute from my home, and too, because I preferred a non-denominational seminary. I missed my Anglicanization, but my beloved priest, later my spouse, taught me everything I needed to know and gave me Mass classes too.

Dick is a lifer—50 years as a priest in full-time parish ministry. He survived well in part because he didn’t need everyone to like him. Appalling! “You gotta be border-line hated to exert good leadership.” There’s wisdom in that statement. Dick was a cookie cutter Episcopalian from childhood. Openness to change is the secret of survival. Episcopalians evolve—some kicking and screaming, some joyfully, and some in the Resurrection.

The Chapel Eucharist was followed by the deconsecration of the chapel. Deconsecration isn’t the best word, because this space will never not be holy, although it will probably be used for other than religious purposes. Bishop Alan Gates suggested the word “decommissioning” as a way to understand the process. It was first commissioned as a place of worship in 1869.

We began with shared reflections and remembered stories. One of my favorites was one the bishop told. He was an EDS student when one of the more august and wry professors took him into the chapel and pointed to the stained glass window in the apse. “Do you see that?” he asked. “Yes,” Gates said. “The panel with our Lord” the professor said.  Gates pointed to the one he thought the professor meant. “No, I mean that one of our Lord in the middle.”  “Oh yes.”  “What color is that robe?” “Red.” "Yes, and what is our Lord saying?"  Gates was stumped, fearing there might be some obvious liturgical answer he should know. “ Our Lord is saying, ‘Hey How do you like my new red dress?’”

There was humor and reverent irreverence, the spirit of EDS.  The liturgy soared. There was perhaps an over-abundance of music—just the right amount of too many Magnificats. Still, it was a time for singing, weeping, and remembering. I particularly liked the way the Prayers of the People were sung—a cantor offering biddings, followed by voices from the congregation with particular concerns, the refrainic antiphon, all of it underscored by soft humming of choir and congregation. For once words didn’t dominate and collective prayers did rise and surround us like incense.

The Rt. Rev. Carol Gallagher, the first woman of American Indian (Cherokee) heritage consecrated bishop in the Episcopal Church in 2001, and EDS graduate 1989, gave the homily. It was humorous and full of memories of worship in this chapel. 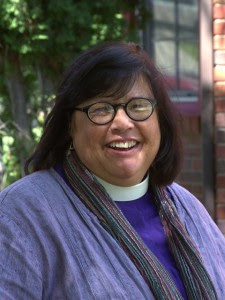 Bp. Gallagher reminded us: “Any place we make too sacred can destroy us. Move on.” It hurt to hear and it is the call of the gospel of Jesus Christ. Move on. She closed her homily singing a hymn “It is well with my soul.” We joined in. Gifts we have received here do not die; they change the world.

The memorial chapel of St. John’s was erected by Robert Means Mason for the school in 1895. One of its closest neighbors was the poet Henry Wadsworth Longfellow who sang its praises.

I stand beneath the tree, whose branches shade
Thy western window, Chapel of St. John!
And hear its leaves repeat their benison
On him, whose hand thy stones memorial laid;
Then I remember one of whom was said
In the world’s darkest hour, “Behold my son!”
And see him living still, and wandering on
And waiting for the advent long delayed.
Not only tongues of the apostles teach
Lessons of love and light, but these expanding
And sheltering boughs with all their leaves implore,
And say in language clear as human speech,
“The peace of God, that passeth understanding,
Be and abide with you forevermore!”